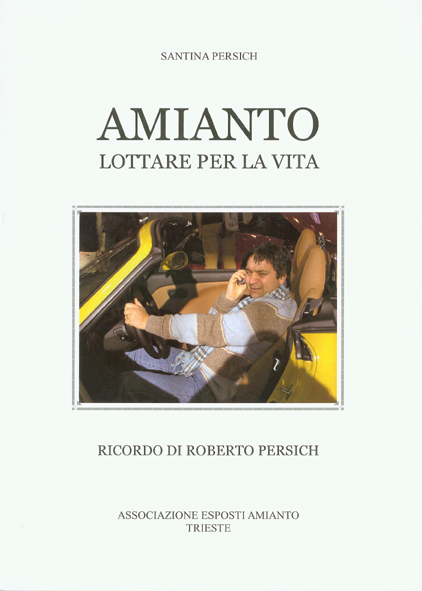 I edited the new book Amianto, Lottare per la vita, Ricordo di Roberto Persich. If you're interested for a copy, please send me a message.

The is free for downloading.

Dedicated to the Memory of Roberto Persich

Roberto Persich had a simple life, dedicated to his work and his family. He was one of those people that, whatever might happen, he always put up with things with a smile.

He met his sad fate due to an invisible, colourless, odourless substance that was present in the atmosphere in his workplace.

Asbestos brought about his early, painful death despite his wife’s self sacrifice and her attempts to help him to recover.

He attended our association meetings without fail, and now he is gone. He has left behind a clear message – fight against illness without ever giving in.

Hi, Roberto, from your friend Aurelio.

Excerpts from the letter:

I am sure that, like me, Roberto would have wanted to give his heartfelt thanks to the two doctors for their professionalism and sensitivity throughout our three and a half year ordeal.

They, together with doctors, assistants, nurses and staff of both hospitals, did everything they could to give Roberto a chance of life.

I only hope that anyone else that finds themselves faced with such a terrible illness can find such dedication, professionalism, solidarity and friendship as we did.

My heartfelt thanks, in Roberto’s name, to you all.

My name is Tina and I am here to tell you the story of my suffering.

Five months ago I was made a widow. My husband Roberto died at the age of 46 due to a malignant pleural mesothelioma (cancer caused by exposure to asbestos). Our terrible odyssey started after a banal dose of the flu in December 2004. Roberto had a pain on his right side and a raised temperature that wouldn’t go away, so the doctor prescribed antibiotics and a chest x-ray three days later.

It all started then, with the chest x-ray, when a competent radiologist stopped Roberto and offered to take him to the thoracic surgery ward where he was examined and was admitted as an urgent case. The result? One of his lungs wasn’t working as it should, he had a pleuric effusion. It was just before Christmas. They gave him various different tests and at the beginning of January 2005 they took a biopsy. The result? The worst news that a wife can hear on her husband’s return from the operating theatre. How to break the news?

Here in Trieste there was nothing they could do, but one of the doctors (who was to become a great friend to Roberto) gave us a glimmer of hope in the form of an operation in Mestre, near Venice. It is a radical procedure and in Roberto’s case involved removing all of the area on the right side where the pleura was contaminated, since that is where the tumour forms, on the pleura. So they took away everything; lungs, pleura, diaphragm, glands, lymphnodes, muscles, everything. A prosthesis was then inserted so that the heart stayed in place, thus avoiding any further risks. After getting over this, which was far from easy, there was the chemotherapy: another hell on earth for 24 hours a day with continuous vomiting and nausea. He couldn’t even walk. And then they told him, "Roberto, now you’ve got to go through radiotherapy" to ensure that none of those damned cancerous cells got away. "Ok, I’ll go through with it, if that’s what it takes to stay alive" said my love.

I was always beside him, day and night, giving him encouragement: "my darling, please, just eat this small piece of apple; my love, please, let’s try a small walk".

Our daughter was lost when she saw her father like that - he had always been so active: football, skiing, running, fun. Luca, our eldest, was angry with everyone and everything, with God, why HIS father? Nicole, our daughter, was emptied of all her sunshine. She was the sunny one of the family and now, for her, everything was black. But despite all of this, Roberto always had a smile on his face, always encouraging other patients to carry on, that life was still marvellous and he really believed that everything would turn out for the best.

During his therapy, he underwent two more operations, one worse than the other. They took away two ribs, opened the thoracic cavity again due to a bronchial fistula. It was an endless suffering, always in hospital, never at home, and then the final operation to fill in the thoracic cavity, a transplant of muscles from Roberto’s back. My poor darling. He looked like the hunchback of Notre Dame.

But he always stayed strong for me and our children. He told me "you’ll see, love, everything will work out fine".

And so, we got to 2008. Roberto took early retirement. In fact, after everything that had happened to him, after all the operations, he went back to work. Even if he had to take medicine for his thoracic cavity that had opened three years after the last operation. First the medication was given by the hospital and then for months after, I gave him the medication two or three times a day. At a considerable cost. Sometimes doctors that understood our situation would help us out. More than once, we tried to get help from public bodies, but God help us! We had to write a list of supplies, with codes, numbers, written requests etc. Roberto gave up: "Until we can" he said "we’ll sort ourselves out". But Ulysses, as they nicknamed my husband, since he too fought against Titans, carried on asking for help regardless, several times, without success.

This undermined his health and compromised Roberto’s life. But my beloved husband had faith in the State, so much so that he tried to pass this on to his children and encouraged them to be good citizens.

A lawyer, Ezio Bonnani from the Roman law courts, heard about our situation through Aurelio Pischianz, President of the Trieste branch of the Association for workers exposed to asbestos. He wanted to help us and he continues to do so to this day. After meeting Roberto, he took our story to heart and started to help us without any form of compensation – he told us that we needed our money for Roberto’s medication. He was the one that gave Roberto the nickname Ulysses, due to his strength of character, his bravery, and the great love he had for his Penelope: me, his wife. He is helping us to get justice for Roberto now that he is no longer with us; to get his due for having been a marvellous man, a model citizen, an enviable father and above all, a hard worker – so much so that in the end, the work that he loved so much ended up killing him.

Please, help us to get justice for Roberto and all those that have been killed by or suffer from this terrible illness. Justice for all the mothers and children who, like us, are living through this immense, endless suffering. We do not want to be forced to resort to drastic measures in order to have justice and recognition. We will not suffer in silence.